So I’m wondering what if you started with position counting circles (e.g., in context of highway travel (miler per hours and mile markers). In the context of counting, the teacher enters in the count into desmos so that a graphical view of the count (position vs time) is projected. Of course, you pause for discussion about the count at key times. Students get to see the graph being made and its trend, (wrong) counts that buck the trend. Whoa what happened to car when the graph and count went negative (Maybe it crossed a state line?). On other counts, stop before close to the end and ask, “Who will be the person to who counts the moment where the car crosses the state line? How did you figure that out?” Whatever. Ask questions about why the graph looks the way it does… 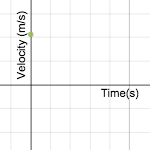 Then: What if after practice with circle counting, class discussion around that, etc.– you gave students a buggy, a buggy highway, and starting position and asked them to design an experiment to figure out “the count” for their buggy and what it’s graph looked like. You would probably want to require them to collect enough data points that they can make a graph.

Of course, since it’s in desmos, you’d use the desmos’ activity builder, you’d overlay their graphs at the front of the room. More discussion around that. At some point, depending on your class, you’d move to equations for the lines.