I developed 6 static friction stations over the weekend for our introduction to friction in introductory physics. Most of the stations present students with two objects that need to be “budged”, and some hopefully accessible (visible or tactile way of telling) which one is harder to budge.  Students are asked to predict which one they think will be harder to budge, and to articulate their reasoning. 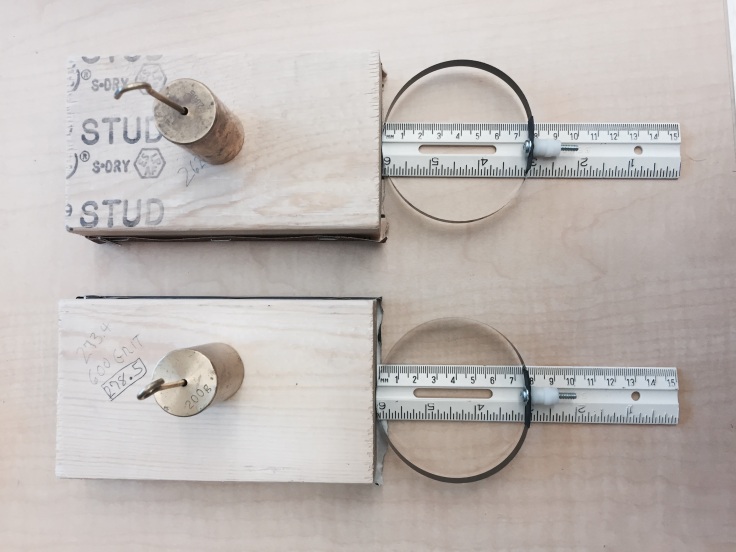 The first one (above) is 2 identical blocks wrapped on the bottom with sand paper of a different grit. Students tend to know that material should make a difference, but often select the wrong one. The rougher feeling sand paper is not grippier! [Makes me wonder why do we sometimes say that coefficient of friction has to do with the roughness of the surface? Rubber is quite grippy, but no one would describe it as rough. Some rocks surface feels quite rough but are pretty slippery.] I’ve been asking students afterwards to feel the two and tell me which one they think they would rather have on the bottom of their shoe and why?

The second one (above) has identical blocks (and masses) placed with different surface area of contact. It’s common for students to think that more area will allow it to be more grippy. Students are surprised that it doesn’t seem to make a difference. Later, we’ll address why that might be the case. 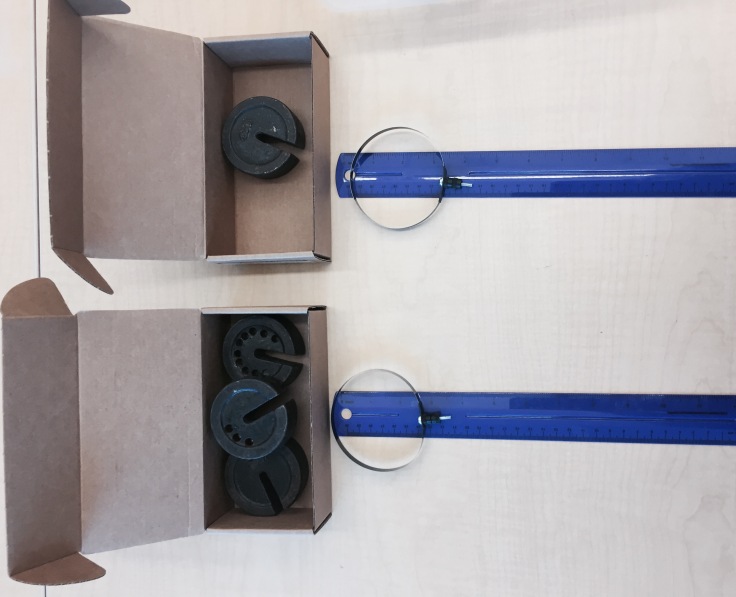 The third one (above) has objects of different mass, which students tend to get correct (although not necessarily for the right reason). Mass comes up in two other demos.

The fourth one (above) has two identical masses, one sitting on a surface, but the other identical mass is being pulled up slightly with a rubber band (thus lessening the normal force) Students tend to get this one correct, but getting them to articulate why they think so is a bit of work.

The fifth one compares barely lifting (vertically) to barely budging (horizontally across a grippy surface). It’s a 1.0 kg block, so it takes about ~10N to lift. So far, students mostly think it will take more than 10N. The reasoning I hear has been, to lift it vertically, only the weight is opposing you, the air isn’t offering any resistance… to move it horizontally, you have to contend with both weight and the friction. Students are confounded!  After, I try to get students to shop through their minds of objects in their house that they think they could budge, but not lift.. it’s easy to come up with some. This definitely gets us in the stickiness of the different between mass and weight.

Station 6: Heavy without friction or light with friction

The sixth one has a heavy frictionless cart, and a light friction cart. Students pause to think here, quite a bit. In talking with students, it seems they are conflicted. What is most surprising to them is that any force gets the heavy cart to budge!… I’m going to have us watch the “million to one ” video from PSSC, after I think.  Five and six together really get at tough ideas, not just about friction, but about mass/weight/N2nd Law, etc…

I’ve made a few changes to the setups from the pictures, including labels for the objects (A and B), and coloring that makes it easy to identify that one that has a friction pad.

Next time, I want to do the first three to establish that mass and material matters, surface area does not. Doing the discussion with all six was too much. Have that discussion, first, and solidify those ideas.

Then, return to the issue of mass with the last three — mass matters, but not in the way you might think.

Possible to also refine idea of material… so 3 to establish what does and doesn’t matter, and then follow ups to refine our idea of how and in what way material / mass matter!